-200+ students of SCMS-Cochin School of Business plan an ambitious campaign to reach out to 500+ schools through street plays and LIVE demonstrations on how to conserve and recycle water.

Cochin, 24th November, 2015. SCMS-Cochin School of Business has declared the 24th November, 2015 as the launch date for its annual CSR initiative – Parivarthana. This month-long initiative conducted every year by students of SCMS-Cochin School of Business is credited with introducing school children to numerous social issues. Parivarthana 2015 is likely to educate young schoolchildren on the topic of water conservation.

“There has been an intense build-up to the event,” says Dr. Filomina P. George, Director, SCMS Cochin School of Business, confirming the launch dates. “Students have pitched their ideas and different ways of presenting the topic to the schoolchildren. The best of the ideas are put together in a script. This is how Parivarthana is conducted. The script and practice sessions are now in the fine-tuning stage. Every day we are building more value in the demonstration that will be given to the school children. The idea is to ensure that these kids, who are the future leaders of tomorrow, are not just equipped with the relevant knowledge, but are hands-on when it comes to various efforts to preserve water and understand its value in the first place. A lot of research and hard work have gone into the preparation for Parivarthana 2015.” 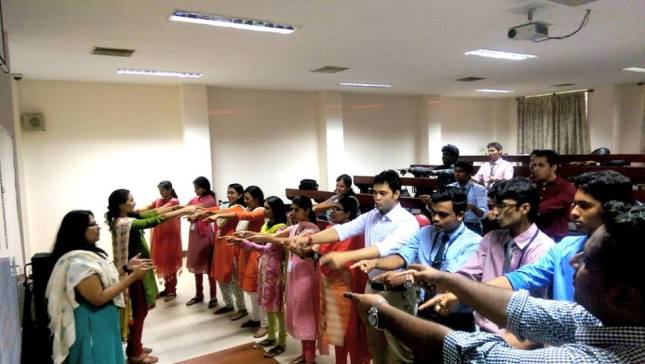 Over the years, Parivarthana has turned into a unique social responsibility initiative of the SCMS Group of Institutions. Its objective is to empower school children and adolescents to face some of the social challenges of modern society. It is an annual program in which students from SCMS institutions visit the schools in and around Ernakulam and interact with other students with the purpose of educating them on how to understand and deal with important social issues of the time. The ultimate goal is to give children the knowledge they need to prepare a better future for themselves. Different themes like drug abuse, AIDS, ‘Police are friends’, and Traffic Rules were covered in the last few years.

As per traditions, the on the launch date of Parivarthana 2015, i.e. 24th November, scripts would be handed over for the streetplay to the core Parivarthana team members. This will be followed by a performance of the street play by the core team. The audience of the school will thereafter be engaged through an open quiz, followed by a group action song. The inaugural session of Parivarthana 2015 will conclude with the administering of an oath encapsulating the spirit of the initiative.

Parivarthana has a fixed administrative setup. The entire task force of 200-plus student volunteers has been reorganised into about 6 to 7 batches – 3 to 4 each from the PGDM and MBA streams. Each batch has been further sub-divided into 3 groups of 12-13 students each. Starting on the 24th of November 2015, every day 2 groups from a batch will be sent to 2 schools each; thus addressing 24 schools on a daily basis. Every group will spend one hour in both their allocated schools.

Posted by scmscochin on November 23, 2015 in News And Events

“To effectively respond to change one has to do in depth research about the given problem,” Mr. Harikrishnan Nair, Chairman of CII’s Kerala State Council and President, Western India Cashew Co. advises the students

Students of SCMS Cochin recently had the privilege of listening to and gaining from the experiences of Mr. Harikrishnan Nair, Chairman of CII’s Kerala State Council and President, Western India Cashew Co. The seasoned professional is also the man behind the brand of snack foods, Wenders, which is the first branded snack from India to be retailed in supermarkets across Europe and the US. As he talked about the development of his brand and offered insight into the industry, he focused on the all important concept of “Change”.

With a number of technological advancements in the market, change is inevitable and is happening at a very fast rate. According to Mr. Nair innovation requires change and that’s something he would know a thing or two about after being the innovator with his Western India Cashew Co. There he worked on cleaning of cashew tips that led to profits for the company. Speaking of change he said, “To effectively respond to change one has to do in depth research about the given problem. Perspective matters, one has to think about a given problem from the point of view of another human being.”

Mr. Nair also had sound advice for those who might want to turn entrepreneurs in the future. He asked them not to jump into entrepreneurship just because it had been a goal for them. “You should try and get a few years’ experience in the industry. You need to have clear ideas and being an entrepreneur cannot be your primary goal.” He then revealed that the cashew nuts business was a family enterprise with primary markets in the UK, US, EU and Africa. With his innovative ideas he managed to take it to a whole new level altogether.

According to him being open to change helped in his endeavors. He is also happy about the fact that he had the experience as a professional to fall back on whenever needed. “Innovators and entrepreneurs need to constantly think on their feet and keep in touch with the changing market environment. They also need to change effectively when the time arises. These traits that I had imbibed during my days as a professional helped me in my entrepreneurial goals,” he stated before going on to reveal what he thinks is integral to one’s entrepreneurial dreams.

Mr. Nair believes that before taking the plunge, one should sit down and consider what’s really important for their business. “At the back of every business model there should be the idea that you are creating value for consumers. Perspective matters and putting yourself in other person’s shoes can solve most of the problems faced by entrepreneurs and marketers. You can identify how a business prospect might fare in the next five years and that can give you an idea of the outcome,” he added practically and drove his point home.

Finally he warned the students of the risks and advised them to not make mistakes that could lead to repercussions that would be insurmountable. The highly engaging sessions ended with Mr. Nair fielding questions from the audience. He then expressed his final thoughts on change when he said, “Change is the current trend; but change responsibly and not just for the sake of change. Co-dependence, co-operation is more valuable than just competition. Fresh management graduates should be willing to work from the ground up without showing any negative attitude.” Now that’s advice that all management aspirants could do well following as they set out on their career paths.

Posted by scmscochin on November 12, 2015 in News And Events