‘Set an anchor that drives you towards your goal and dreams.’ This was the punch line that Mr. Rajasekhar Ramaraj put forth in a talk that gripped his audience.

Mr. Ramaraj is a chemical engineer from the University of Madras, MBA from IIM Kolkata, founder and till recently the CEO of Sify Limited, and a pioneer and leader in internet, networking and e-commerce services in India.

We, the students of PGDM batch-21, were especially fortunate to have attended the session of such a dynamic and versatile entrepreneur. Entrepreneurship is a challenging path to take from any business point of view; there are only a handful who risk taking up a business they really desire and love. “In today’s uncertain world, knowing one’s goal and having a mentor are a must”, stressed Mr. Ramaraj.

Many budding entrepreneurs were bubbling over with questions and the energetic speaker was ready to address all their queries. One of the questions asked was regarding the role education plays in the evolution of a successful entrepreneur. With a humble smile, he answered, “Education is an add-on to your skills, but to become a pioneer in entrepreneurship, education is not the prime focus”. You need to build up on your resources and focus on a lot of other skills to work towards success.

Serving one’s society and being patriotic are two lessons we could learn from Mr. Ramaraj, who has made impressive contributions to society. The plight of  Indian sportsmen and women is often talked about, but only a few like him actually work towards  improving matters. At the end of his talk, he was able to drive the thoughts of many students towards the vast ocean of entrepreneurship. His passion and dedication towards his work spread a positive vibe among all his listeners.

Posted by scmscochin on December 24, 2012 in events and activities

The 9th international conference on E – governance – ICEG 2012 will be held at SCMS campus Kalamassery on 29th and 30th of December. 0n 29th Saturday, Dr.V.P. Joy IAS, Principal Secretary Finance, Govt. of Kerala will inaugurate the conference at 9 AM. The speakers from India, US, UK, Australia, Germany, New Zealand, Thaiwan, Korea, Canada and Philippines will lead the different segments. Former President Dr. APJ Abdul Kalam inaugurated the first conference in 2003. In 2004, the Government of Srilanka, with the Prime Minister as the Chief Guest, hosted the conference at Colombo. SCMS – COCHIN (School of Communication and Management Studies, Cochin) is organizing the ICEG -2012 in association with International Congress of E-Government.

More than 300 delegates will participate in the conference. It aims to provide a forum for discussing research findings, strategies, policies and technologies in the growing field of E- governance. Dr. V. Raman Nair, Director, SCMS informed in a press note.

‘Aligning HR with Business Strategies’ two days national seminar on HR will be held on 26th Wednesday and 27th Thursday of this month at SCMS Campus, Kalamassery.

Posted by scmscochin on December 19, 2012 in events and activities 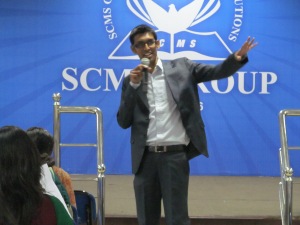 The latest Industry Interface Interaction at SCMS-Cochin opened a new window on Microsoft for those who attended it. On hand for the session was Piyush Mittal, who was speaking on behalf of Educonnect Microsoft. He updated and educated students on the latest software and technology that Microsoft had to offer.

Under Microsoft’s Educonnect programme, company employees dedicate time to such educational pursuits as teaching math and sciences in local classrooms, helping teachers with technology training, hosting tech camps for students and demonstrating a range of tools to help teachers, students and parents prepare their kids for the future. The programme started in the United States but has since spread to 43 countries and is continuing to grow.

Mittal highlighted the main features of Microsoft products such as Windows 8 and Windows Phone 8, and went on to compare various browsers with Microsoft’s Internet Explorer. He also outlined the main features of the latest version of Internet Explorer which includes truer colours, clearer graphics, more responsive websites and tracking protection.

Moving on to cell phones, Mittal said that although the largest market is held by Android today (68 per cent), Windows Phone 8 is growing at a much faster rate. He also cited the latest cell phone – the Nokia Lumia 920 – which features the Windows Phone 8 operating system.

Discussing Microsoft’s Bing search engine, Mittal told SCMS-Cochin students that it was much more customised, and then went on to cover Microsoft’s gaming console. He told students about  the ‘Kinect’ feature, in which the person playing becomes the controller of the game and can play using motion sensing technology. Kinect is a motion sensing input device for the Xbox 360video game console and WindowsPCs, which enables users to control and interact through a natural user interface using gestures and spoken commands. A version for Windows was released this year. Kinect was launched in 2010 and after selling a total of 8 million units in its first 60 days, it holds the Guinness World Record for being the fastest selling consumer electronics device. A total of 18 million units of the Kinect sensor had been shipped as of January. He also discussed the Windows server, Windows Azure, Windows Dynamics, Skype and all their features. He highlighted Microsoft’s storage space, Skydrive, which he said provides the highest online storage (25 GB) for free.

While Piyush Mittal concentrated mainly on Microsoft, this Industry Interface Interaction really helped the SCMS-Cochin students to get updated on the highly effective technologies in the market today.

Posted by scmscochin on December 19, 2012 in events and activities

Starting with an introduction on the NSE and what a Capital Market is, Mr. Jain spoke to us about the differences between Savings and Investments. Further emphasis was laid on where and how we can invest our money and also on why we should choose a capital market for our investments. With few new products launched in the NSE, Mr. Ravi briefed all of us about the Gold ETF product.

Essentially, buying Gold ETF is the act of purchasing gold in electronic form. Thus, Gold ETF makes it easier for us to invest in gold. According to Mr. Jain, it was a good idea to invest in this new product as it is Simple, Safe and Trusted.

Looking beyond the simple question of where to put your money, students were also educated about the Rights and Obligations of the Investors, something most investors are ignorant of. We were also given insights on how we ought to be careful before or while signing or agreeing to investor services. An understanding of the terms and conditions specified and also understanding the Power of Attorney is important to every individual who invests in these ETFs.

During the interaction session, Mr. Jain mentioned the various steps involved in investing and the role of a broker in trading. On a concluding note, he highlighted the importance of knowing the capital market before one invests. All in all, it was an enlightening and very important interaction for all of us who are potential investors.

Posted by scmscochin on December 13, 2012 in events and activities

It was yet another Industry Institute Interaction (III), and students of SCMS heard a thrilling tale of how a successful company was launched, and went on to become the only mini steel plant of Kerala. Steel Complex Limited (SCL) was originally promoted in the joint sector between the Kerala State Industrial Development Corporation Ltd. (KSIDC) and SAIL in 1969 in Kozhikode.

Mr. P. Saidev, MD -SCL, started the seminar with a very unconventional yet inspirational twist on the story of the race between the Hare and the Tortoise. As his narrative unfolded, all the students were increasingly curious to find out the context that Mr. Saidev was using it in. When he came out with a new moral of the story – ‘Teamwork Wins’ – he had everyone’s attention. Everyone was keen to hear the details about what he called Joint Ventures.

In very simple terms, he explained that a joint venture is an arrangement where two or more companies co-operate and run a symbiotic business alliance to enhance and capture an increased market share. This has become very important in today’s times, where costing and competition are the two biggest hurdles a company needs to overcome. Generally, companies dive into joint ventures to attain set goals, economically impossible for them to achieve independently. As Mr. Saidev stated, industries strive for economies of scale in their production process. This can only be achieved by reducing the research and manufacturing costs, and mutual expertise from both partners that will ensure a competitive advantage over their rivals. Also, this partnership allows them to be able to take more risks for the company’s expansion, perhaps in terms of production volume or expanding into new geographical territories, as because they are able to share the liabilities of risk-taking. A prominent example he gave was of how Jindal Steel Works (JSW) went on to make a joint venture with the stagnant ISPAT steel industries, as a strategic decision to penetrate into the Maharashtra market –  jointly, they captured most of the market in the state.

After highlighting the overwhelming results that can come from a Joint Venture, he moved on to compare the pros and cons. To explain the complexities, he used an insightful quote from one of the papers at Harvard University, which talked about Joint Ventures — “Joint Ventures can deliver more shareholder value than mergers and acquisitions, but getting them off the ground can trip you up in an unpredictable way.”

Using more facts to bolster his opinions, Mr Saidev said that according to Harvard Business Review, almost a whopping 47% of Joint Ventures are failures. He was insistent that   mistakes made during the launch period offset the success of many joint ventures. As he summed it up succinctly, “If you get the launch right, the rest will take care of itself.”

Encouraging the young PGDM students who are going to enter the market soon, he gave them the helpful advice that they should remember that launching and successfully running joint ventures is a really demanding task. To do it successfully, they would need meticulous planning and the right amount of investment, which would certainly yield a better return on investments in the future.

Mr. Saidev concluded by saying that “success lies in the details”, and by working to enhance the productivity of an organisation, we should also focus on making a difference to the lives of others.

Posted by scmscochin on December 13, 2012 in events and activities